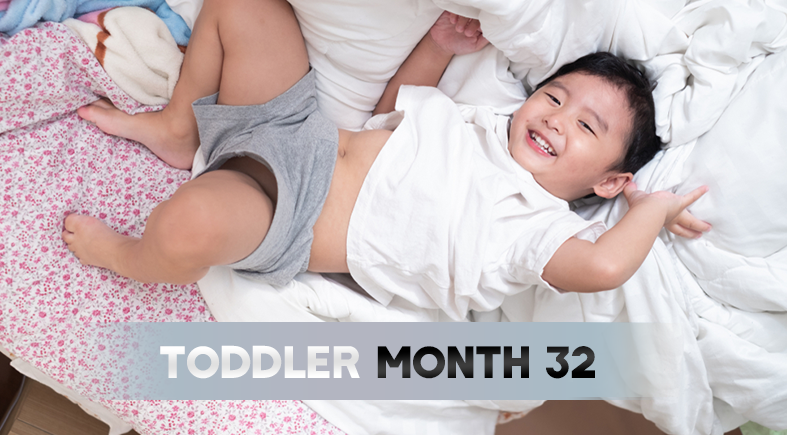 Your child becomes more aware of other people and even begins to adapt his speech, his words to his interlocutor. He is able to use a different tone and vocabulary if he is surrounded by adults or children. You may also notice that he is simplifying his sentences to address children younger than him.

Your child is becoming more independent

As your child learns to do things alone, such as washing and drying hands, you may find it hard not to intervene. Stay calm: it does not matter if the bathroom is a little messy, the most important thing is that your toddler develops self-confidence and becomes independent.

Encourage your toddler to give up the potty and use the toilet by letting him watch you, if necessary, you or your spouse when you go to the bathroom. Show him how you empty the contents of his pot and how you flush. Make sure the toilet seat is comfortable for your child. You can also buy a toilet reducer and a step. The toilets may look very big and scary for the little ones!

“To help our child adapt to kindergarten, we started by leaving it only in the morning. I noticed that our separations were much faster and happier, almost a formality! Then my son realized that I will always pick him up at the end of a half-day, and he is now at school with pleasure. “

Tip For This Month

Should I put a nightlight in my toddler’s room?

You can choose whether or not to leave a light on at night in your toddler’s room without worrying that it will spoil his eyes or disturb his sleep.

Many parents have begun to worry about the dangers of seeing a night light or small light at night following the 1999 publication of an American study. This revealed a link between the use of night lights in children under two years of age and the development of myopia. But since then, the authors of this study themselves have gone back on their discoveries and other studies conducted by other researchers have revealed no link between the use of night lights and myopia. Do not worry about your child’s sight.

Many children sleep with the lights lit at night. This reassures toddlers and older children who are afraid of the dark or monsters. It also prevents parents from bumping into furniture at night!

However, leaving a light at night is not necessarily essential for toddlers. Indeed, children do not know the anguish of the night before two or three years. It is only at this age that their cognitive development allows them to understand the concept of fear and that they are able to imagine the presence of scary things hidden in the dark. Before that, your child will sleep better in a dark room.

If your child is afraid of the dark, use a night light that diffuses enough light to soothe it but does not light the room too much. If it wants a bright light, install a dimmer and reduce the brightness over the nights

Why did my toddler get so hard at the table?

It’s only natural that overnight, toddlers decide to eat only certain foods and nothing else, even things they loved yesterday. They eat more than that at each meal and do not want to try anything new. According to British dietitian Nancy Hudson, this is a fear of novelty, also called neophobia. It would be a reaction developed by man to protect himself during evolution. People with neophobia refuse novelties because they do not know if they are safe for them.

Children love familiar things, whether it’s their bedtime ritual or their cheese sandwich. This is the reason why many children only accept new foods after several attempts – sometimes up to 20!

By being difficult with food, some children also seek to assert their independence. He might tell you something along the lines with “I will not eat exactly what you give me”. Their refusal sometimes has nothing to do with the proposed food! It’s a way for your toddler to test the limits of your authority and to assert control over your own existence. That’s why forcing your child to eat often turns him on even more.

Therefore, you may think that your child is deconcentrating too quickly to ingest everything he needs. But do not worry, children instinctively know what they need, even if the amounts swallowed may seem very small. Just trust him!

One study showed that 49% of mothers considered their child difficult; these children all consumed a wide variety of foods, which were sufficient to satisfy their nutritional needs.

Here are some tips to help you better manage a difficult child at the table:

– Give your child a variety of good products at every meal. For a child to consider new food as familiar, you have to offer it to him several times. He will eventually have enough confidence to taste it. Be patient! When you propose a new food, simply place it on the table with the others, without making any remark. After seeing you eat this food several times, maybe your child will feel more confident to try it too.

– Limit choice when eating According to Nancy Hudson, if you ask your child what he wants to eat, he may choose a dish that is already familiar and you will find it difficult. Conversely, if you tell him, “This is dinner,” he will choose from the foods you offer him. Of course, do not just offer him dishes or recipes he does not know: he might not eat anything. Plan at least one food that he likes.

When introducing new foods, try to suggest one or two of them in small quantities. If by some miracle your child wants to try new food, have his first taste before filling his plate. It will be easier for him and you will not waste food.

Here are some tips to help you better manage a difficult child at the table:

– Respect the tastes of your child. Some children are harder than others and do not like the texture, color, flavor of certain foods. They even say they often do not like foods they have never tasted. Other children sometimes reject foods that remind them of a time when they were sick or another negative event. If your child says that a particular food may make him sick, stop offering him for a while. Try again when he is older.

– Try to involve your child in family feeding decisions. Shop and prepare meals with your child: he will have the feeling of controlling his diet. He will be more inclined to eat something he has chosen and prepared himself. If possible, offer him a selection of balanced products that you have chosen beforehand.

As your toddler opens to the world and discovers the kindergarten or nursery, his tastes are also growing. Seeing his comrades eat dishes still unknown sometimes gives him the desire to get started and taste too.

Your child has an innate sense of how much food his body needs to be healthy and healthy. He is able to decide what he wants to eat. Offer a wide variety of healthy foods in a relaxed and positive environment. Remember that meal times must be a good time for everyone!

If you are worried, talk to your doctor or pediatrician, but do not pass on your anxieties to your child. If during meals you’re always close to cuddling him or counting calories, your child risks your child may have even more trouble eating. Continue to offer a wide variety of foods without making a “fuss”.

Trust your little one, he knows how to eat what he needs.