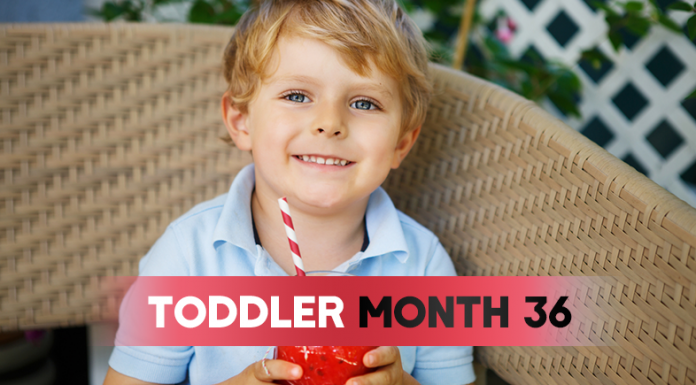 Baby is celebrating the three years mark this month and from the start of its 36 months, your baby is fully aware of who he is and his place in the family.

Awakening, development, and growth of the 36-Month-old baby

Your child is now three years old and he is perfectly aware of who he is. Whereas before, when he spoke of him, he had a tendency to use his first name in the sentence, he is today able to say “me, I”. To help him in his autonomy, do not hesitate to arrange for your little one space of games that is reserved for him. A hut in the garden or a small tent in your room will suffice.

Your child will be delighted! Nevertheless, it is not because the baby loves to have his own space that he is therefore asocial. Indeed, at the height of his three years, he loves to play with children his age, even if he tends to want to be the little chef. Although more tolerant than before, your little one still risks arguing with his boyfriends if they do not agree with him. But this behavior will not last and the disputes will be, in the weeks to come, much rarer.

Baby has passed one by one of the stages of his dietary diversification. Today, he eats almost the same foods as you and can share family meals. Nevertheless, until 5 years old, your baby must avoid certain foods. Raw meat and fish are to be banned, as well as raw seafood. Skimmed milk, raw milk cheeses, sweeteners or light foods are also to be avoided. As for the dishes, the wine sauce is not recommended as well as the assortments of peanuts, nuts, hazelnuts, and pistachios.

In recent years, many television channels aimed at toddlers have emerged. Although programs are usually geared to your child’s age, do not leave your little one long hours in front of the screen. Indeed, it could develop an early addiction to television, or even other disorders such as for overweight, by dint of being passive.

Another element to take into account: the vision of your baby. Spending a few hours in a row, eyes on a screen, whether computer or TV, is not good for his eyesight.

His personality is more defined

At this age, your child becomes more and more himself, and you can have a good idea of ​​his personality. He develops his self-esteem and becomes more aware of his strengths, interests, and talents. The bonds he has with you are becoming stronger, and he is no longer afraid of being abandoned.

As your child is in a period when his identity is being built, he sees you as a model. In his actions, he also wants to please you more, but that does not prevent him from expressing his displeasure and his opinions. This actually progresses as it is learning to be heard. That’s why it’s important to listen to what he has to say to you and to guide him to do it respectfully.

The imagination and the rules in games

The 3-year-old is usually optimistic and playful, and his imagination takes more and more space in his games. He is also sociable and able, to a certain extent, to participate in a collective game. However, waiting for his turn and sharing still, present a challenge for him. He has trouble tolerating time to get attention or to play a game, for example. Sometimes the child can spend more time negotiating how and with whom he plays than playing. He could, for instance, say, “Today I will not play with you. I’m playing with my other friend. He also begins to understand the rules of a game, even if he does not always respect them. He is also able to state the rules of a game and notice that another child does not respect them.

Likewise, the 3-year-old plays better at pretending, not just from roles, but also from themes and stories. His play often revolves around the theme of “rescuer and danger,” and he often plays the role of the leader of strong characters, such as Superman or a lion.

Try to give your toddler the opportunity to have fun alone or with other children as often as possible. Games alone and those with friends of his age allowed him to be creative and leave more room for his imagination than games with adults. He will, however, be happy to help you cook, broom or pick the leaves out, as he likes to “play” to be an adult.

His ability to argue increases

At age 3, your child begins to understand simple rules and he better controls his impulses. Before this age, he can apply certain instructions, but it is difficult for him to understand the meaning, which can cause reactions of frustration.

He also understands what “no” means, which does not mean that he will do what you ask him to do. He is also at the age when he develops his capacity to argue. Likewise, he is now able to ask why a rule. In addition, as he is still egocentric, the pleasure he gets from a game or activity is even greater than his desire to follow rules or instructions. However, it is important to continue to set limits and have realistic and consistent expectations at this stage of development.

Teach him how to recognize your emotions and other people’s

Your child’s tantrums may be a little smaller because he speaks better and is more successful in expressing his feelings in words. For example, he is able to say, “I’m angry” or “I’m tired.”

Even if he expresses more verbally what he thinks, it is possible that your child does not yet have a vocabulary varied enough to describe what he wants or how he feels. Since he cannot express himself with words, he can begin to whine. For him to learn to use words rather than crying, help him identify and name his emotions or whatever he wants.

Your child also begins to realize that others, like him, feel feelings. When you guide him, he can understand the consequences of his actions or words, for example, that he may have hurt a friend by refusing to play with him.