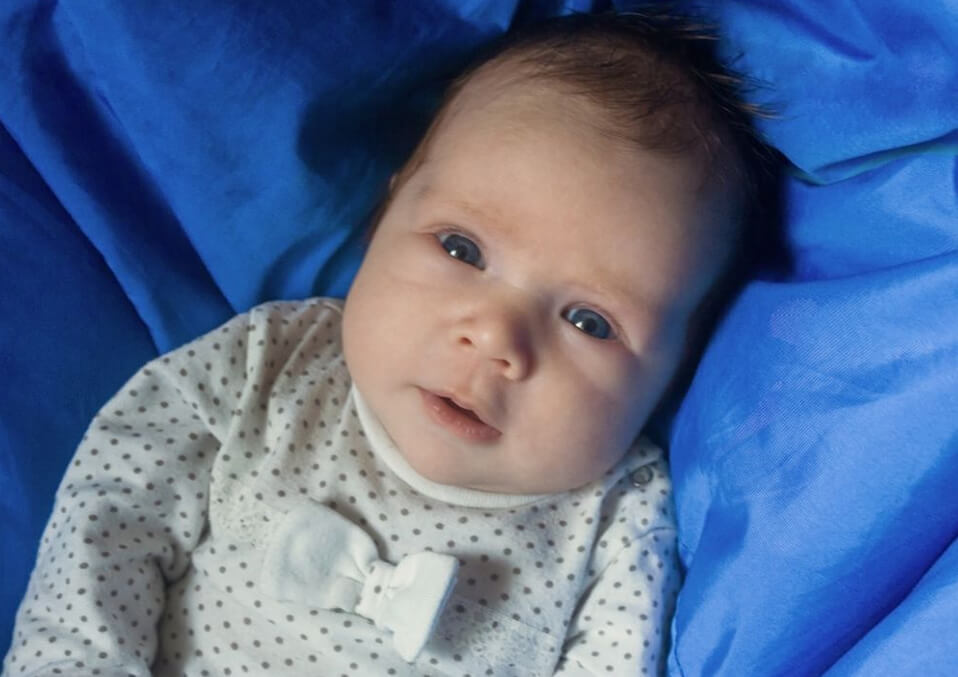 When Do Babies Open Their Eyes After Birth?

Your newest family member is finally here. When can you expect to see those beautiful eyes? Most babies open their eyes within minutes of birth, if not immediately, so you shouldn’t have to wait long to see those peepers. Your baby’s eyelids may be puffy after birth, making it difficult for him to open his eyes very wide. Newborns tend to open their eyes better when you hold them upright, so you can encourage your little one to open up by getting him vertical.

If your baby is born prematurely, his eyes may not open right away, especially if he’s born before 26 weeks’ gestation. His eyes should open around the 26-week mark without any extra treatments or interventions.

How Well Do Newborns See?

Even though babies open their eyes shortly after birth, they don’t have 20/20 vision. In fact, they’re so nearsighted that newborns usually have 20/200 to 20/400 eyesight. What they see is quite limited in those early months. Newborn vision is still developing after birth, so your little one can’t focus well. Her eye muscles are also getting stronger, which means you may notice her eyes crossing or turning outward. That’s perfectly normal until the muscles develop more.

Newborns seem to only be able to focus on objects about 6 to 10 inches from their eyes. Beyond that range, babies just see blurry shapes. That means you need to get in close, so your baby can see your loving face. Newborns love faces. High-contrast items are also ideal since babies likely can’t detect subtle color differences until they’re about 2 to 3 months old.

How Do Babies’ Eyes develop In The Womb?

Your baby’s eyes start developing shortly after conception during weeks 6 to 7. The ears start to form at the same time. Around week 10, your baby’s eyelids become better developed. By about 11 weeks, the eyelids close completely. They’ll stay that way until the third trimester, around week 28, when they open in the womb. At that point, she can open and close her eyelids and roll her eyes around. Think of it as practice for her teenage “eye roll.”

What Do Babies See In The Womb?

So what can your baby see before birth? There’s not a lot of scenery to admire, but your little one can see a little bit, especially when you’re in bright sunlight. The bright light can penetrate your belly, so your baby may be able to pick up some faint light, but his eyesight isn’t good yet. Sight is the last sense to develop, so he needs some time to see clearly, even after birth.

When Does Will My Baby See Clearly?

Your infant will almost certainly observe pretty obviously when he’s a year old, however, his vision won’t be completely created until he’s somewhere in the range of 3 and 5 years of age. A child’s vision improves significantly over the primary year. During childbirth, a newborn child can distinguish light and movement, at that point can make out countenances and huge shapes. Before the part of the bargain month, a child can look and concentrate on items around 12 inches away.

When a child is 3 to 4 months old, he can recognize hues and spotlight on littler articles. As his profundity discernment improves, he can concentrate on items up to 3 feet away and watch movement around him. In the event that you move a shake from side to side a couple of creeps from his face he’ll tail it with his eyes – an aptitude known as “following.”

On the off chance that your child doesn’t watch moving articles, or on the off chance that he appears to experience difficulty moving one of the two eyes toward any path when he’s 4 months old, converse with his primary care physician. His normal well-kid checkups incorporate essential vision appraisals, yet he most likely won’t have a formal vision screening until he’s 3 to 5 years of age.

Your child’s vision will go from foggy to brilliant in a couple of months. Know the achievements as your child’s vision creates, and figure out how to help suit his evolving visual perception. This week-by-week, a month-by-month guide will control you through the procedure.

The Reason Is That The Child’s Eyes May Not Be Completely, Very Much Accustomed To It

I think your tyke has an issue called hanging eyelids (ptosis). Generally, it might show up as an extended or overwhelming upper eyelid.  This is brought about by muscle shortcoming, which makes the eyelids be raised, nerves controlling these muscles, or free skin on the upper eyelids. In the more genuine cases, the covers may hang so much that they obstruct the youngster’s vision.

This issue frequently includes a solitary eyelid. Here and there the infant is brought into the world with ptosis, or indifferent cases, it can grow later. It might make the infant’s eye accept a sporadic shape (astigmatism), along these lines compromising ordinary vision.

Treatment of ptosis takes into account ordinary vision improvement. In the event that it isn’t revised, a condition called amblyopia (apathetic eye) may create.

Whenever left untreated, amblyopia may prompt perpetual poor vision. A kid brought into the world with ptosis may likewise have other related therapeutic issues.

Youngsters with ptosis frequently tip their heads once again into a jawline up position to attempt to see underneath their eyelids, or some of the time they raise their eyebrows trying to lift up the tops. With ptosis, which does not compromise vision, the activity is generally deferred until the youngster arrives at the age of four or five.

Treatment of ptosis in kids is typically careful. Careful reclamation, generally speaking, is exceptionally powerful in reestablishing the appearance and elements of the eyelids. In exceptional cases, after medicinal strategy, the eyelids may not look absolutely even or return to full eyelid improvement, which requires different tasks. Consult an eye specialist (ophthalmologist) who will survey your youngster and decide whether an activity is required

Soon after birth, your infant sees just in high contrast, with shades of dim. As the months pass by, your child gradually starts to create shading vision. Along these lines, babies like to take a gander at the differentiating shades of striking geometric examples. On the whole, we can say that the newborn take a long time in order to open their eyes and adapt his eyes with the colors.