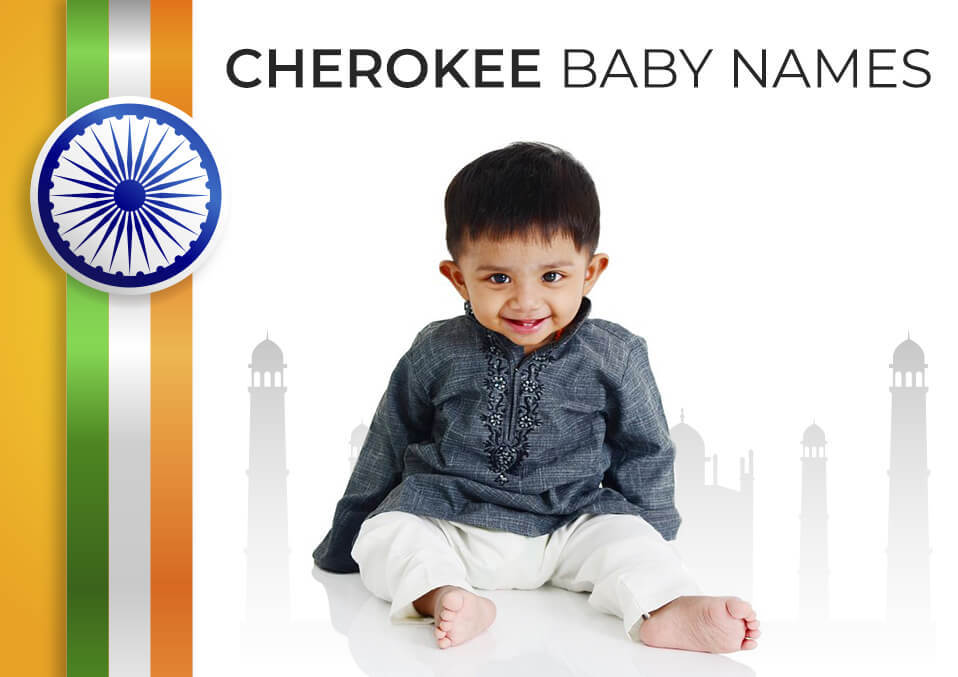 
The Cherokee people are a hardy, honorable Native American tribe who have existed for centuries. Known for being an agricultural people, the Cherokee take most of their names from the nature that surrounded them. It shouldn’t be quite a shock to find out that the meanings of their names correspond to the natural and earthy.

Giving your newborn child a Cherokee name connects you and your family deeply to Native American roots. Not to be taken lightly, a Cherokee name can set a precedent for your child’s future personality—they can be fluid and versatile like water, beautiful like the blossom, or even strong as a Sequoia tree. Significant meanings aside, having a Cherokee baby name is a beautiful nod to history, and will surely be appreciated by many that get to know of it.

In this article, you will find the Top 15 Cherokee baby names in America. Paired with their meanings and correct pronunciation, you can easily choose which one will be your future child’s namesake.


The Cherokee people have a matrilineal society, so the mothers have the right to bestow the names of their children. Seven days after the birth, there will be a naming ceremony including the tribe’s priest and several of the elder women, those of whom are held to high regard. The most revered elder woman would then name the baby based on their attributes or appearance at birth. This name is actually a nickname that would then be changed or altered, depending on the child’s future actions and traits.

Names for the Cherokee tribe are sacred and a big part of a person’s personality, hence the amount of respect and care that goes into naming their children. Misusing a name is believed to bring misfortune and ill luck to people, so it’s best to treat these following names with respect!

The following is a list of the top 15 Cherokee baby names in America. Give them a gander and select the one that you feel fits your baby best!

(ahd-SEE-lah) This name means “blossom” or “flower”, for baby girls. The Cherokee people were fond of naming their children after the beautiful things in nature, hence the origin of this name.

(OH-nah-COH-nah) This name means “white owl”, for little boys. For the Cherokee, animals stand for different attributes that are seen as desirable or superior. In this case, the white owl represents wisdom.

(TAH-yah-NEE-tah) Same as the name above, Tayanita is a girl’s name taken from an animal due to its attributes. This name means “young beaver”. Young beavers are known to be hardworking creatures, swimming against the current of river water to build rough dams.

(ah-TOH-hee) This is a boy’s name meaning “trees”. Trees are near-sacred for the Cherokee people due to the belief that trees and everything else in nature had spirits. This name is perfect for when you want a name that sounds unique and has a special meaning.

(WOH-yah) Woya is a girl’s name that stands for purity and peace. Literally, this name means “dove”, which stands for peace in many cultures, including Native American.

(aht-SEE-lah) This unisex name means fire. In Native American culture, fire is a great element, able to foster life, thus a large amount of respect that is paid to it. This name is a great conversation starter for when the origins of your kid’s name come up!

(who-HAH-lee) A name for baby boys, this name means “eagle”. For the Cherokee people, the eagle signified great bravery and honor. Eagle feathers were used for headdresses of the most decorated chiefs, hence the meaning.

(YOH-nah) Another unisex name for a child meaning “bear”. Bears in Native American culture signify strength and protection. Some may also stylize the spelling as Jona or Jonah, with a soft j.

(ah-YOH-kah) This is a girl’s name, meaning “She brought happiness”. A child is known to be a bringer of joy and delight to families in all cultures, whether big or small and in whichever location, so this name is fitting for a little baby girl.

(AH-mah) This name is a unisex moniker, meaning “water”. Water, just like other elements, have garnered great reverence and respect in the Cherokee community, due to its serenity and the abundance of life that it can bring. Naming your child this is akin to giving him or her a blessing.

(GAH-lee-LAH-hee) For baby girls, Galilahi is a beautiful name that means “attractive”. People believe that newborn children blessed with this name are going to grow up with attractive traits, whether it be charisma or outward beauty.

(aht-SAH-dee) This boy’s name means “fish”, which has a deeper meaning in Cherokee culture. Fish are said to bring good luck, so naming your baby boy this could bestow some good luck his way!

(CHA-skah) Another name for baby boys, Chaska literally means “firstborn son”. The Cherokee people give significance to numbers, and bearing a first male child is seen as auspicious.

(kah-MAH-mah) This name, meant for baby girls, means “butterfly”. Butterflies are seen as delightful, whimsical little creatures, so having this as your darling daughter’s name is appropriate!

(nah-KAH-mow) Nakamo means “to sing”, so giving your son this name could set a precedent of a future of music ahead of him. Watch him grow as a young singer or musician!

Taking names from a culture that has roots that run deep into the history of a place carries some heavy history to them, that’s why it’s best to be careful and consult someone who participates in that culture. Names are important; they will forever be used by your child, and there is a great emotional attachment behind it, so choose your baby’s names wisely. Open your heart and mind to different influences and suggestions, and you just might get a unique name!