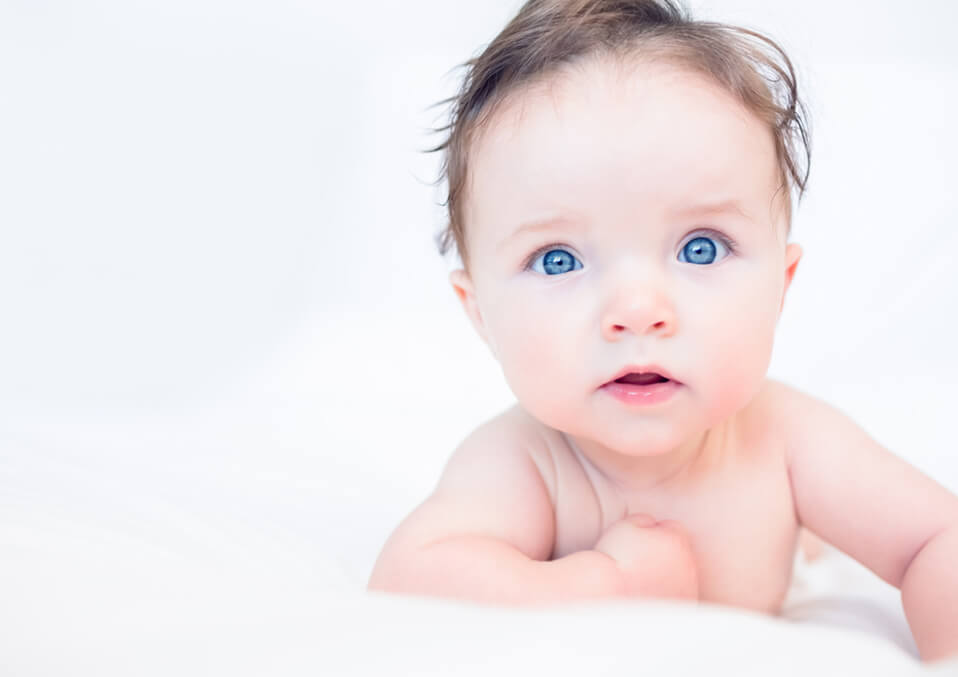 Every individual has an immediate lineage such as aunts, uncles, grandparents, who have blue eyes and brown curly hair. So, you might be surprised that a cousin’s blue-eyed turn to brown on the first birthday. Although the baby’s eyes are quite blue at birth, it may turn into complete brown as he reaches a year and a half. When the child was a newborn and have some blue eyes, yet both parents have no genes on such color, the mom might be shocked by how it broke its pattern of the family. Unless the father is a blue-eyed man, then the chance is half.

Most of the Caucasian babies often associated with light blue eyes after birth, since the iris, is not yet exposed to the sunlight. Although eventually, your baby’s eyes are brown, it will stay blue until being exposed with more light. And the prediction of how long do babies’ eyes stay blue will be unveiled as the baby turns 1 year old. Yet, most of the huge change can happen between 6-9 months.

Although there are babies whose eyes may change speedily, with the melanin onset. Most of the infants have undergone momentous change between the age of 6-9 months. This fantastic occurrence takes place once the iris begin to keep some pigment with enough amount to influence huge changes like from blue to gray. then green would be hazel or hazel will change to brown and so on. You should always remember that the colors of the eyes get darker generally, not lighter. So, if your daughter has brown eyes, don’t expect it will become blue in later life. While if you have a blue-eyed boy, there is a possibility it will end up being green or brown also.

Do the eyes of your babies change color?

• As mentioned, if the was born with brown eyes, that would potentially be his eye color permanently. But, if the baby’s eye color is blue, there are ways to determine if this would stay or not.

• Check the eyes from the side area, this is to get rid of the light that reflects off the iris.

• If you can observe some flecks of gold in the eyes, this means it may likely change to either green or brown as the child gets older.

• If no flecks of gold or just minimal, it’s less likely to change much to other colors in the future.

Another index is, if the eyes are clear or bright blue most probably they would stay blue. In the case that it’s darker, cloudier blue- most likely they would transform into brown, hazel or darker color.

What color eyes will your future baby have?

There is no innovation or way to indicate what would be the eye color of a newborn will have. But, research shows that most of the eye color results of a child are due to the parent’s eye color. So, generally you can expect:

• If both parents have brown eyes most likely a brown-eyed baby comes up.

At present, the eyes of your baby may be in a shade of blue or brown, but it won’t often be the case. Here is how you can tell will change eye color. As a mom, you need to grab the change of gazing the beautiful blue eyes of your baby, hence there is a chance it will turn to green or brown later. The African-American, Asian and Hispanic commonly have babies with dark-colored eyes that would stay the same, although in the 1st year a slight change may occur, different scenarios for Caucasian babies. This only means, you have enough time to play some bets on what the final eye color of your child would be or how long do babies’ eyes stay blue.

Do you know what is responsible for this fascinating eye color change of your little ones? The answer is the melanin amount (the part of the eyes with color)- that in turn is determined by the genes of both parents and the baby has inherited and other factors too.

What’s the purpose of melanin in the baby’s eye color?

Produced by the cells, melanin is the pigment that is behind or responsible for your skin color and also the hair (the hair color you had when you’re a kid). The same as the effects of the sun that turns your skin is a darker pigment, it does the same effect in terms of the eyes. As soon as the baby enters the world, and exposed in the birthing room lights-the melanin will soon be produced in the iris that resulted in the change of the eye color. Just a drop of melanin, your baby would have blue eyes, but if added more it will result in hazel, gray or green; and even black and brown colors also.

When does the color of the eyes change?

The dramatic change of your eye color occurs between three-six months old. By that time, the iris can stock the right amount of pigments for you to predict much better what is the final hue. Yet, the eye color of your child may still keep some surprises. Because, there can be some subtle change of the eye color like green slowly transforms to hazel and hazel will become deep brown, until reaching the age of three. Just take the hope that brown eyes will revert to blue-dark eyes since dark-colored tend to stay as it is.

You might be one of those mothers whose child is born with blue eyes and wondering are they going to change, or how long do babies’ eyes stay blue? It takes approximately 9-12 months. To determine what is the permanent color of your baby’s eyes. The transformation can be gradual, to the point you don’t notice it is happening already. Yet, one thing is certain, on your child’s 1st birthday –the same eye color that stares the birthday cake is the one your child has permanently.