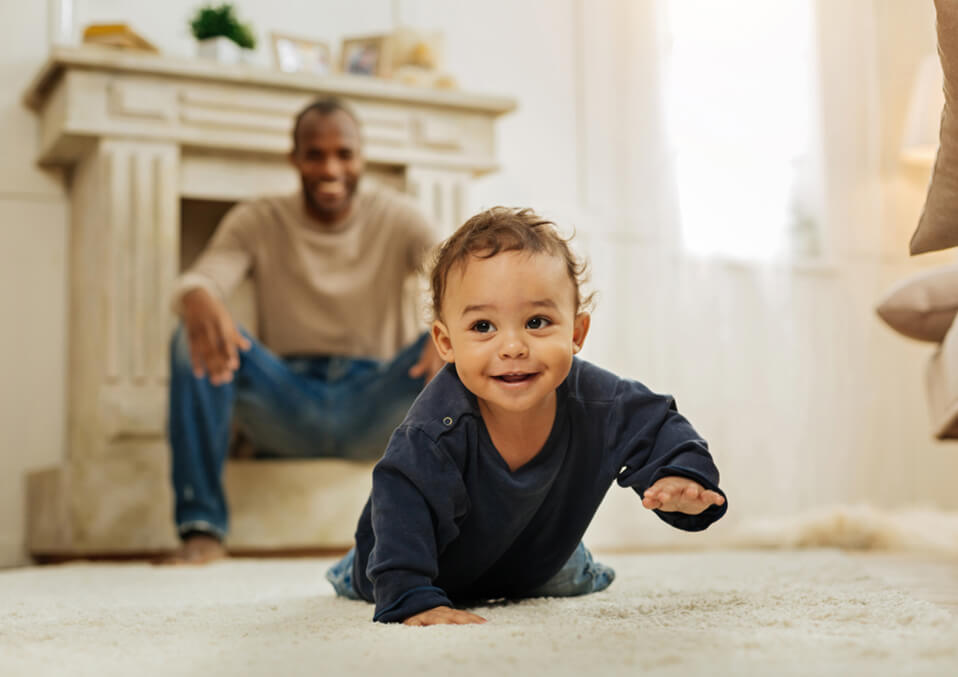 Crawling is the indication that your baby already is capable to efficiently move on his own. The normal timeframe for baby crawls is about 6-10 months but be aware that not all babies learn how to crawl, some babies are immediately trained on how to walk in a stroller as soon as they learn how to sit. Although crawling is not considered as a developmental stage, it is still an important phase for babies where they can develop their physical and mental functioning.

Crawling allows the baby to practice the coordination of his arms and legs. Even though your baby explores how to do it, your supervision is still important. At this stage, you may need to be extremely careful because their curious eyes would grab anything that they see. In this article, we’ll talk about how the baby crawls and how to guide them as their guardians.

Manifestations that your baby is ready to crawl?

The crawling phase depends on the baby, not all babies have the same pace when they do things. You would know that your baby is ready to crawl when he starts to roll over and later on be able to sit on their own. Your baby makes use of his arms and legs for support until he learns how to balance himself especially when he is in the sitting position. You would know that the baby can control her balance already if he can grab things while crawling.

What if your baby doesn’t crawl within the timeframe?

Not all babies develop at similar timetables, some tend to learn a certain behavior faster than the others but it doesn’t mean that there’s something wrong with them, maybe they have a slow developmental style at this phase but it is totally normal. The timeframe which is about 6-10 months for the baby to crawl is just the average timeframe where most babies learn to crawl but there are babies that only started to crawl after 10 months and they are also normal.

There is also a possibility that the parents started introducing walkers or strollers to their babies already that is why they didn’t have any chance to learn how to crawl. It is normal for the baby not to crawl within this time frame but he should show signs of moving like rolling, sitting, etc. until 12 months. You would know that there is something wrong if the baby’s body coordination if the baby didn’t learn how to move after 10 months. If this happens, you need to seek medical assistance for further diagnosis.

How to encourage the baby to crawl

The tummy time session is a good exercise for the baby where the muscles of their arms, shoulders, trunk, and torso are strengthened. It is advisable to do this with your baby a couple of times a day while playing with him. Place him on your tummy facing you, make sure that he is awake so that he could practice his movements. It is also advisable to hold your baby in this position to avoid him having a flat spot on the head.

Read also: Everything you should know about child growth

If your baby knows how to sit, you may take him on the floor and allow him to watch you do the push-up position so that your baby can imitate you especially if he’ll show you do this regularly.

Your baby will be eager to move just to get his reward may it be a favorite toy or anything that would excite him. Expect that your baby wouldn’t move on the first try but if you will regularly show him this kind of reinforcement, eventually he’ll learn to move by means of crawling to get what he wants.

Every Time your baby crawls. It is important that someone supervise him especially if the surroundings are not child-proof. To be sure that your baby is always safe, the place where he can crawl should be childproofed, the hard edges should have buffer so that when your baby accidentally bumps he will not get serious wounds, also secure anything that he holds such as sockets and other holes that can be hazardous and check if there is a place where your baby can fall like a staircase.

It is when the baby puts his weight on his hands and knees while his arms and knees at the same time. This type of crawling is also known as cross-crawling that teaches the baby to improve on his balance.

As the name implies, it is when the baby moves using his hands and feet but his elbows and knees are just in a straight position making him look like a walking bear.

This is also known as commando crawl where the baby puts his body forward while pulling his belly forward to move. This is one of the types of crawling where they start and learn how to get started.

It is where the baby slides on his bottom by using his arms to move forward.

The baby will not stand up but instead, he will make use of his sides to roll just to get in his destination.