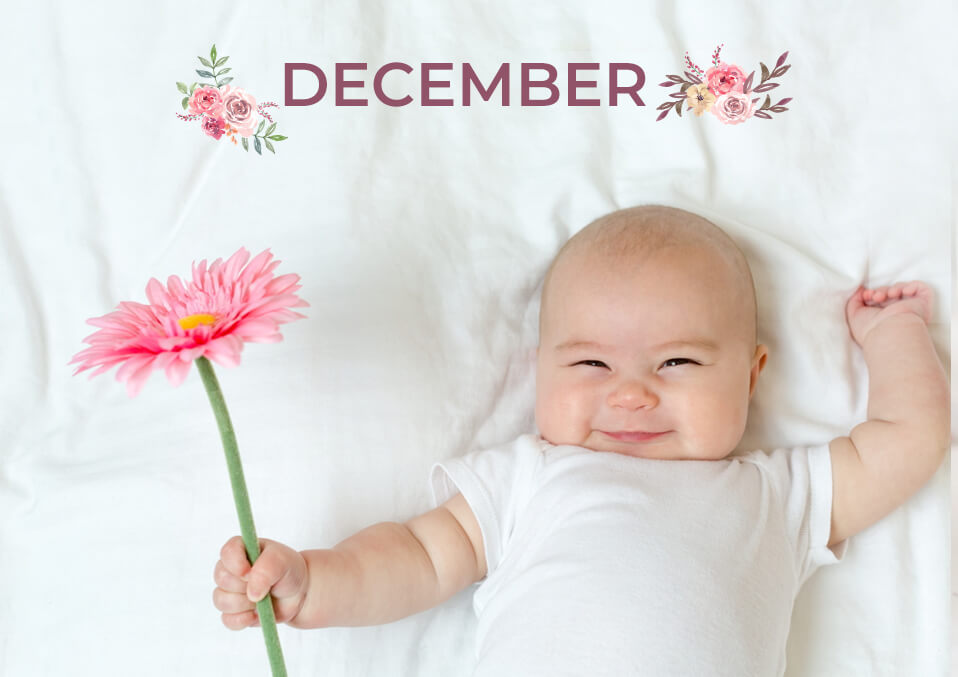 The month of December is often associated with celebrations and holidays, of family gatherings and festivities. It’s a time of transition as autumn turns to winter. A season of colors, lights and glittering ornaments. A time of giving, kindness, merriment, and cheer. These and more are the terms and the things associated with December.

As parents count on the month after conception and the child’s birth will fall in December, that’s one big additional reason to be happy. And come to think of it, their creative minds will start rolling, thinking of unique names that will fit the baby. Inspired with both classic origin and contemporary trends, here are some of the appealing names for those December born, cuddly cuties.

Noel: A classic favorite perfect for the holidays. Noel is the French word for Christmas. Short but strong, it was used since the Middle ages fo babies born in December. It’s the feminine counterpart, Noelle is equally famous.

Cole: The name evolved from the Old English word Cola, meaning “charcoal” and coal-black.” The name is then usually given to persons with dark features. But since December is known for winter solstice, or days when the nights are longer, the name became a favorite for babies born in the end month of the year. This short name also radiates richness and depth.

December: Taken form the name of the month itself, December is a name for either boys or girls. In 2016, records show that the name was given to almost three out of a million babies being born. The term December has its Latin root which means “ten.” Before, December is the tenth and last month of the year.

Abner: Tracing its root from the Hebrew language, the name means “father of light.” Also, in the Old Testament, Abner is the cousin of Saul and the commander of his army.

Christian: A follower of Christ.

Aubin: A fresher and more masculine twist of the name Aubrey. It is derived from a French word that means “white, blond.”

Casper: A name is commonly known from that of the friendly ghost, Casper has its Scandinavian and Persian roots meaning “treasurer.” Casper is one of the three Magi who brings gifts to the infant Jesus. The other two were Melchior and Balthasar whose names can also be a popular choice for December babies.

Pax: In Latin, Pax means “peace.” In Roman mythology, Pax is the name of the goddess of peace.

Jack: A very simple but timeless name that became a favorite through the years. It has its spiritual meaning as “God is gracious.” The name is very common to kids as many nursery rhymes bear the name. In the Middle Ages, Jack became the slang for the word man.

Jasper: A vintage name that has its Decemberly appeal, Jasper means “treasurer” or a “bringer of treasure.” This is also a variety of the name Casper.

Nicholas: This name with the Greek origin is translated as “victory of the people” or people’s victory.”

Robin: This popular name fits both boys and girls. This usually means “famed,” “bright” or shining” and can be also associated with the red-breasted bird.

Crispin: Sweet baby name that is related to the cold, crisp day of December. It evokes certain freshness and the smell of the snowy weather. Tracing its Latin roots, it means “one with curly hair,” so it fits boys with curly locks.

Emmanuel: The Biblical meaning of the name is “God is with us.” It represents faith and spirituality. It has its feminine counterpart Emmanuelle.

Lumi: This short, cute name means “snow” in Finnish. In the Albanian language, it means “river.”

Charity: Once a classic virtue, but gains popularity and is used also as names. This is appropriate for a baby born in the season of love, kindness, and giving. The name comes from the Latin words Caritas meaning “generous love” and carus which means “dear” and “beloved.”

Angel: This is usually used as a feminine name but can be also used to boys. It means “messenger and is also related to “angelic” or relating to angels.

Astra: A name from the Greek word aster that means “star.” The word was used as a name in the 20th century.

Holly: A cheerful name that comes from the holly tree that bears bright, red berries and fresh green foliage. This became famous as Audrey Hepburn’s character in her film Breakfast at Tiffany’s.

Ivy: This is an evergreen plant connected to Christmas. A British Christmas carol is also titled “The Holly and the Ivy,” adding to the popularity of these words as feminine names during the holiday season. It exudes style and cleverness and faithfulness.

Clara: This name is the feminine counterpart of the Latin name Clarus which means “bright,” “clear” and “famous.”

Eve: A name famous for its Biblical significance as the wife of Adam, the first man created by God. Eve is of Latin origin meaning “to breathe” or the related word “to live,” “living” and enlivening.

Gabrielle: Feminine form of the name Gabriel which means “God is my strong man” or God is my hero.” Gabriel is an archangel often appears as a messenger of God. In the Old Testament, he was sent to interpret the visions of Daniel. He also declared the birth of Jesus and Zechariah in the New Testament.

Joy: Who doesn’t know the Christmas song ‘Joy to the World?’ This may be one of the reasons why the word joy which has its vocabulary meaning as a feeling of great pleasure and happiness became a popular name too.

Olwen: This feminine name has a different meaning related to the snow and its color such as “white footprint,” “white”, “fair” and the word “blessed.” In British literature of the Arthurian era, Olwen is a princess with a giant as her father. She possesses a magical power that let her leave white, clover-like footprints when she walks.

Eirwen: Sometimes spelled as Eirwyn, this unique name is the Welsh version of the name Snow White. The name is associated with purity and also means “white as snow.” It also fits girls who are lively and independent.

Sweet, engaging names that evoke love, peace, and happiness. These December baby names will surely make its way to popularity.