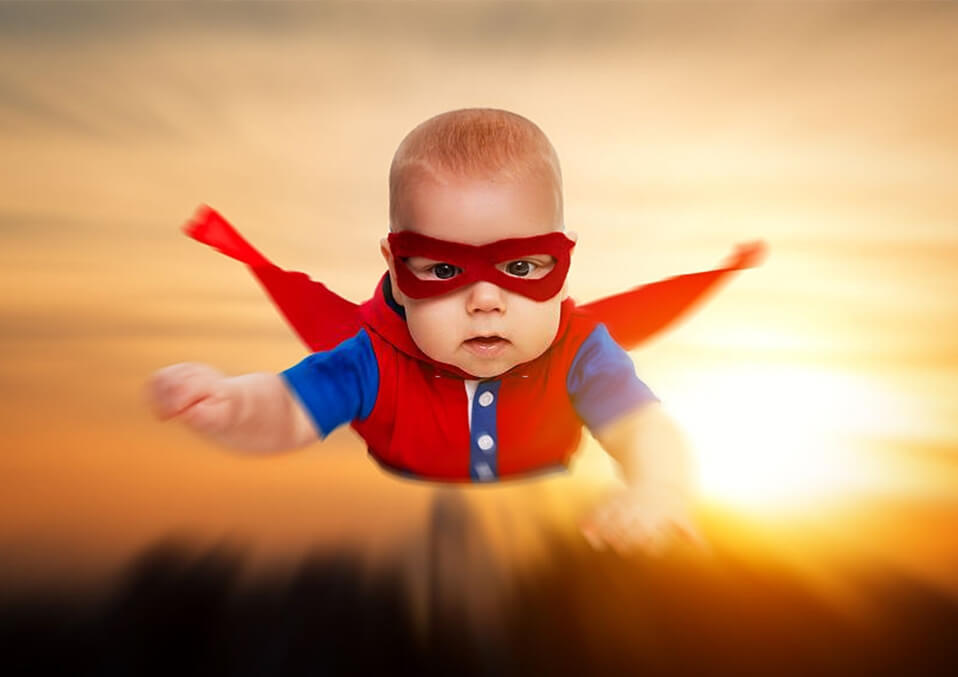 Choosing the ideal name from the selection of modern hero baby names might be a hard task from the choices offered. Simply look for the qualities in a name that you find appealing and you will surely find the right baby girl or baby boy names that will surely stand out of the crowd. You might be surprised to find that one of the heroes you adore is included in the list.

These modern hero baby names might be inspired by stars of sports, movies, literature or politics. Some of the names you might find are from heroes and heroines of the past that continue to inspire us today. Some of these names are typically surnames that can be used as the first name, especially those that are unique.

If you want to provide your upcoming child with an unforgettable yet one-of-a-kind name, let us now take a close look at some of the recommended hero baby names for your little one.

Amelia is one of the modern hero baby names suitable for an upcoming baby girl. The name has German origin which means “work”.

The name has been derived from the German name “Amalia” which is a variation of Amalberga. The root, “amal” is a German word that stands for “work”. In the context of female given names, it indicates themes of fertility as well as productivity. “Aemilia” is a name where Emily has been derived which is not related to Amelia.

Take note that Amelia is considered as one of the most popular names for girls. It is an update to the overly used Emily and Amanda. In 2011, the name emerged as the top British name and holds the #1 spot. In 2017, it vaulted into the US Top 10 for the first time.

One of the most popular names for girls that starts with A, Amelia is also included in the list of Top 10 names for girls in New Zealand, Australia, Ireland, Poland, and Scotland.

It became a British royal name since daughters of Kings George II and III bears the name. Some of the American heroes who have inspired a new generation of namesakes include aviatrix, Amelia Earhart, and the feminist, Amelia Bloomer.

This is a boy’s name of Hebrew origin that stands for “beloved”.

As a fresh variation of David, Davis is gaining acceptance in the spotlight. In some sources, the name is defined as “son of David” but it can be seen as a surname spin on the original. Although David can be considered as an everyday name, Davis boasts a creative edge. It can still give you the classic guy nickname Dave.

Take note that Davis might be a good way to name a boy after a grandfather with the name of David, Davison, Davies or Davidson.

As one of the modern hero baby names, Elvis might be a worthy choice. The name has a Scandinavian origin.

When the King was still alive and the years that follow, only a few dared to use his singular name but now, it is ready for grabs for parents eager to use the iconic name.

The name is linked to the Irish Ailbhe as well as the Irish saint of the same name which is called Elvis of Munster.

The name has a German origin that might be a good choice if you are searching for the ideal name for an upcoming baby boy.

Out of the blue, the name Gatsby made it through the mainstream. When you hear the name Gatsby by F. Scott Fitzgerald, it has been used as the first name for girls as well as boys.

This name has Irish Gaelic origin which stands for “windy place”.

Guthrie is considered as one of the most attractive Scottish names that are also used as a surname. The name boasts a romantic, windswept aura that includes a touch of the buckaroo.

The folkie quality of the name is linked to the father and son pair of singers Woody and Arlo. Other famous personalities that bear the name include Guthrie McClintic, a prominent figure in Broadway theater in the early 20th century and Guthrie Govan, a guitarist in Asia and other bands.

The name Kennedy has Irish origin which stands for “misshapen head”.

As an attractive surname, it projects the Kennedy family charisma. Although the name was not widely used until long after the deaths of the martyred heroes President John F. Kennedy or Senator Robert Kennedy, the name is now one of the most popular unisex names, especially for girls. This is the only name out of the thousands of choices available throughout the years that we’re able to sound trendy and conventional at the same time.

If you want to give your upcoming baby boy one of the modern hero baby names, Madden might be a good choice. The name has Irish origin which stands for “little dog”.

The name is an Irish surname that is associated with Madigan. It has ascended through the charts with the help of the trendy two-syllable, -en ending sound along with its appeal to Madden Football video game-playing dads out there.

It is important to note that John Madden is a former pro football player who coached the Oakland Raiders and eventually became a popular NFL commentator.

Lincoln is a fitting name for a baby boy with English origin that stands for “town by the pool”.

The name was able to enter the Top 50 list for names of boys for the first time back in 2016 which was more than 150 years after the death of its most famous bearer. It is considered remarkable since Lincoln was significantly out of fashion as recently as the late 90s as it continuously hovers near the base of the Top 1000 list.

By choosing Lincoln as the name of your upcoming baby boy, it is an admirable choice with a stylish two-syllable sound that exudes the rangy, tall and upright image of Honest Abe.

This is a boy’s name with Latin origin which stands for “gatekeeper”.

Porter is a quintessential yuppie name. It has been a surname that was able to reenter the list of US Top 1000 back in 1999. This happened after a forty-year absence and has ascended almost every year since.

Ulysses is a name worth considering that has a Latin origin. The name is one of the few baby boy names that start with U. By choosing this name, it will make a fitting choice if you want a distinct name that will surely stand out of the crowd. It has been linked to the Homeric hero, James Joyce’s novel and eighteenth president Grant. All of these make the name a distinguished and prominent option for a modern boy. The name was included in the US popularity list up to the 21st century.

If you are searching for the ideal name for an upcoming bundle of joy, it is best to consider this selection of recommended modern hero baby names. With the selection provided, you will surely find the right one for your little one.