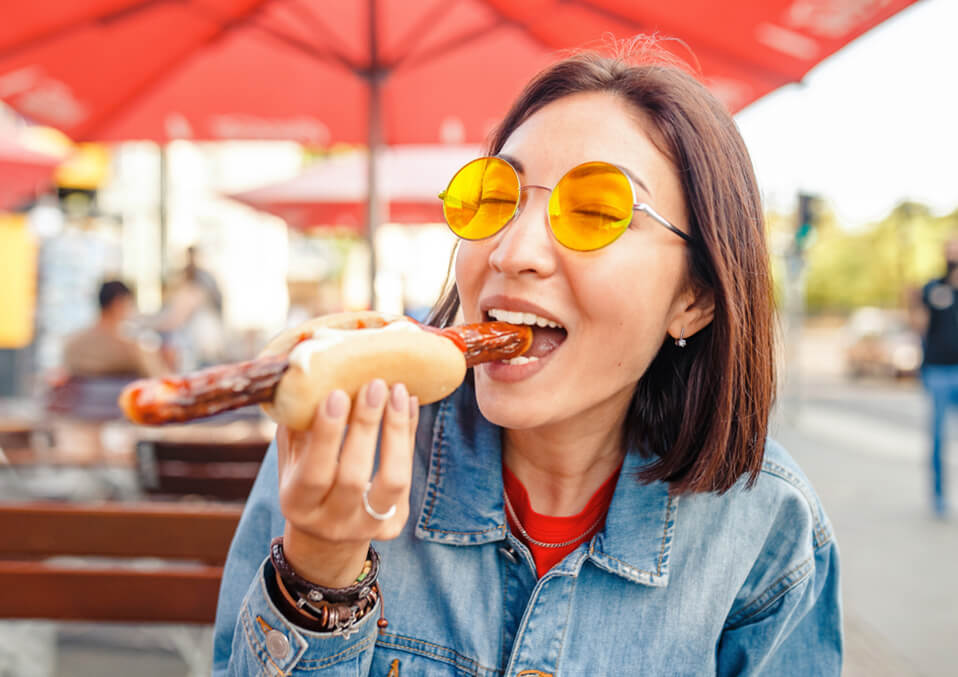 The million-dollar question is on! Can hotdogs be eaten during pregnancy?

The answer is simple: well-cooked and served when hot hotdogs that are consumed little to moderately is considered safe during pregnancy.

Hot dogs aren’t necessarily a superfood that counts as a number one pick that should be eaten during pregnancy but they can be really tasty and delicious snack to be eaten, aside from its lack of health benefits eating hotdogs during pregnancy isn’t necessarily harmful to your baby when the hotdog is well cooked and is served when hot.

We should keep the measures in mind when consuming hotdogs especially if you’re pregnant or have any complications during your pregnancy period; Here are the reasons.


Aside from cantaloupes, raw cheese, and unpasteurized milk, hotdogs are also the main food contaminant of harmful bacteria called listeria. The Listeria bacteria are one food wherein Listeria bacteria may reproduce and grow rapidly in the food surface which eventually contaminates the neighboring foods.

Contacting Listeria bacteria to the food you have eaten may cause listeriosis, a bacterial infection that could cause flu-like fever and illness that can be treated with various antibiotics. Although it is said that Listeriosis infection can be more deadly to the pregnant woman because a pregnant woman’s immune function is at its lowest peak during pregnancy it can cause complications to the baby.

Based on a study Pregnant women are 20 times more likely to be infected than normal adults, some experts even say that Listeria can cause miscarriage or birth malformations although there are no exact conclusive studies to prove this.

Read also: pregnancy diet how safe is it to eat apricot during pregnancy

You can usually experience fever-like symptoms and the gradual weakening of the immune system, especially during the third trimester; Other symptoms of having listeria are nausea, diarrhea, headaches and other similar or related symptoms of catching the flu.

At worst, the listeria bacteria could travel into your nervous system and could cause convulsions. That’s why it is very important that once you experience these symptoms, you should consult your doctor immediately.

Also ensure that your body is replenished with fluids especially if your experiencing diarrhea, dehydration can hinder your baby’s growth and development so be wary of that.

With these complications brought by eating a hotdog containing, take seriously the precautions to avoid even the slightest of infections.

These apply to hotdogs and other cold meats and other similar products, a heat of 100 degrees Celsius is necessary to kill all the bacterial cells living on the surface of the hotdog meat. Make sure of the sanitary cleanliness of the hotdogs you are about to eat, don’t serve them half-cooked or cold at all, also read the labels of your hotdogs expiration date


It is a very common knowledge that hotdog is classified as a processed meat product that offers no nutritional benefits at all.

Aside from that, hotdogs contain a lot of additives, sodium from Monosodium glutamate that can cause liver and kidney problems when consumed in a prolonged period.

There have also been studies shown that pregnant women who consume any kind of processed meats like hotdogs have more chances of getting complications during pregnancy specifically in the third trimester.

Some complications include premature birth, obesity of the infant, or underweight or undersized.


Hotdogs don’t specifically have any deadly chemical put into it.

PAHs and HCAs can travel into the placenta up to the fetus. HCAs and PAHs are very unstable chemicals that can harm your baby’s growth and development, especially when consumed in the long term.

Aside from the polyaromatic hydrocarbons and heterocyclic amines discussed above, nitrates can also be a concern for the baby’s development.

Although it has many positive effects on the visual enhancements of the products, nitrates are specifically produced to be eaten and consumed.

Once consumed, these chemical nitrates can be created as a carcinogenic nitrosamine, it has proven these compounds to celebrated the cells and the normal DNA synthesis of the body which means; it is not safe for your baby

There are healthier options out there!

There is a whole new world out there for hotdogs! Many hotdog brands have been healthy, wise nowadays, and it is very easy to look on hotdogs that don’t have nitrates just check out the branding and the labels.

Many major hotdog brands like Oscar Mayer and Ball Park have been offering only nitrate-free meat dogs.

There are also hotdogs that are vegan, from meat hotdogs to veggie corn dogs to those who would like to try, they nitrate-free and has less chemical producing PAHs and HCAs

Always cook well the hotdogs you are about to consume and always pick the brand free from nitrates and nitrites, always remember that no matter how tasty or delicious your snack is, your baby’s health is your primary concern.

The point of these articles is to provide you that hotdogs aren’t necessarily a bad food that you should avoid during pregnancy, it is true if you eat hotdogs without taking necessary precautions, they can be nasty if not cooked correctly or if you burn it too much in the grill, but it’s okay to eat it in moderation.

It is great to eat foods that your appetite will enjoy but also remember the welfare of your baby to know the best foods during pregnancy click here!